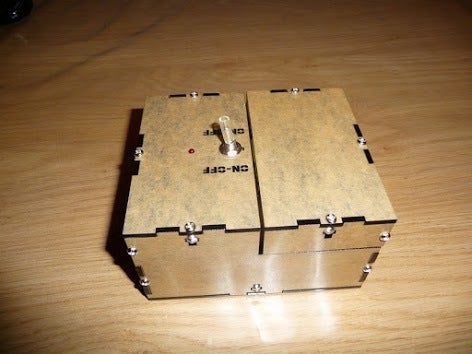 This instructable shows you how you can improve your useless box, when it is reacting way too fast so you have little time to remove your finger after toggling the switch to activate the box.. 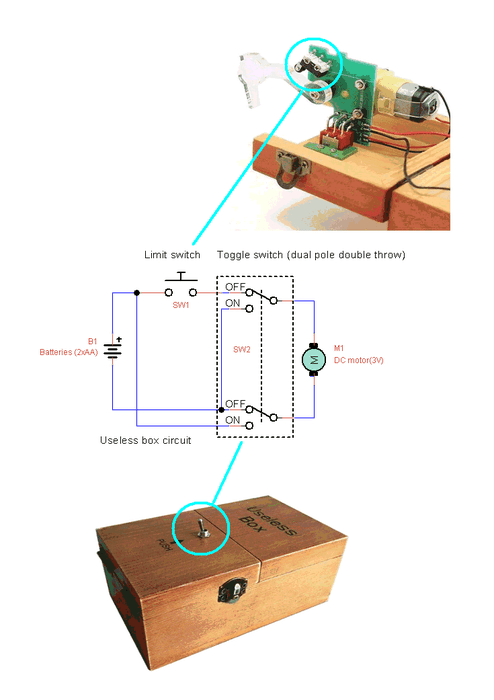 In the start or home position, the mechanical finger, that is connected to a gear motor M1, is pushing against micro switch SW1, so it is pushed open. That means it is switched off and not conducting. SW1 is located inside of the box.

Step 2: How It Works

In the home position, the mechanical finger pushes the microswitch SW1 open, so it is not conducting. The toggle switch SW1 is in the OFF position. The electrical circuit is interrupted and the motor does not get any current so it is not running.

The mechanical finger has reached toggle switch SW2 and pushes this switch into the OFF position. Microswitch SW1 is still closed. The motor reverses direction since the current is now flowing into the opposite direction. So the motor starts running counter clockwise, thereby moving the mechanical finger away from SW2 and back towards the home position.

Step 3: How to Improve (delay Circuit) 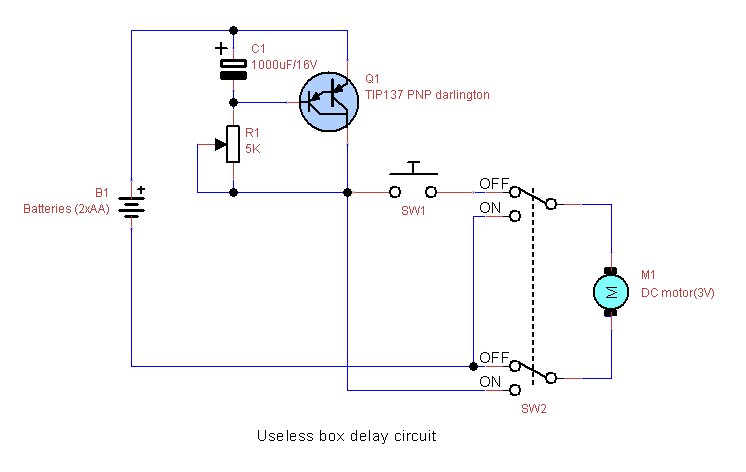 After i assembled the useless box and tried it, i found that the motor was moving way too fast. So when you toggled the switch, the switch was pushed back to the initial state almost instantly before you had the chance to retract your finger.

To solve that problem, i added the the following circuit that causes an adjustable delay. This delay prevents that the motor starts moving right away so you have the time to move your finger out of the way. The delay is created by capacitor C1, which is charged via R1`at the moment that SW2 is toggled to the ON position manually by the user, connecting the motor to the circuit. At first instant, C1 is not charged, so the voltage over the base-emitter junction of the darlington transistor Q1 is 0 and Q1 will not conduct. When C1 is charging and the voltage over C1 reaches about 1.2V, the darlington transistor Q1 will start conducting. With R1, the delay can be adjusted, because R1 determines the charge current for C1. If you want a longer delay, the 5K potmeter R1 can be replaced with a 10K potmeter to get maximum 2 seconds delay.Or you can double the value of C1 to 2200uF, but that might get too bulky to fit into the box. I used a darlington transistor to minimize the base current in order to minimize the load that the transistor forms on the RC network. Darlington transistors have a very high beta, i.e. current amplification = ratio of the collector current and the base current. A logic level P-MOSFET can also be used because it has a low gate voltage threshold (1 to 2V). A standard P-MOSFET has a gate threshold voltage between 2 and 4V, so it is useless for this circuit since it is powered with 2xAA batteries = 3V. Furthermore a MOSFET will not load the RC circuit, because its gate is voltage driven. With this circuit in place, the motor is not started instantaneous when SW2 is toggled by the user,but is delayed by a period that is set by R1 (between 0 and about 10 seconds).

We ship to over 200 countries

24/7 Protected from clicks to delivery

⭐️ Due to the impact of Covid-19 and Chinese Lunar New Year to our factory, from January 10 to 25, please expect some delay in the order processing. Dismiss